Then the Women’s Center and a group of strong-willed, strong-voiced students came out with an official Title IX complaint and made it an even bigger national issue. They said that Yale was a “hostile sexual environment” and that fraternities were mainly to blame.

I was outraged. I loved my friends in fraternities! I loved that they welcomed me to their houses. I loved that one of them found my phone when it was lost, and that another worked with me on Econ problem sets every week. I loved that they were just like all the guys I’d ever known (but more fun, because #college). They were good and goofy and made bad jokes and some even told me I was hot. “Hostile sexual environment?”

NOT MY YALE, I said.

But I couldn’t be ignorant forever. What changed: I took Women’s, Gender, and Sexuality Studies classes. I read books that expanded my feminist perspective (bell hooks! Betty Friedan! Virginia Woolf!). I had experiences in frat houses and at parties that made me uncomfortable. I heard raw stories from peers who had been hurt. I grew up, and in growing up I realized the incredibly simple fact that “my” Yale was not everyone’s Yale. My luck was not everyone’s luck. My privilege was not everyone’s privilege. It’s obvious in retrospect, but understanding the experience of others is often the hardest—and most human—thing we do. Especially when that experience is at odds with our own. Especially when it casts a dark shadow over something we love and are proud of. We don’t want to know.

Social justice is like this. We cannot all see, feel, or know the experience of other groups, of the subjugated or of the disenfranchised. We are not all in a minority; that’s what makes the fights of the underdogs so hard. We, the majority, are the oblivious upholders of a system that works for us. So it’s our responsibility to try our best to banish that oblivion. It’s our duty to accept full equality as a greater good in every sense, from the emotional to the economic. And it’s our challenge to fail less, work harder, and be more conscious every day. The minority does not “win” these fights. Rather, we all must come together better. The baseline gets adjusted.

My parents often ask me why college students are no longer activists. “Where are the protests?” they ask. “Why aren’t you marching against what’s going on in Iraq, Afghanistan, Syria?”

2015 is a bit different. Political activism is passé; maybe we’re too removed from personal impact, or just jaded to violence and bad governance. Instead, the new activism riling our country is for social justice. Equality activism. LGBTQ rights, #blacklivesmatter, Lean In and Title IX and equal pay for women.

But the problem with these causes is that, by definition, they don’t affect the majority. And so, by definition, the minority has to work harder—speak more loudly, agitate more aggressively, demand more insistently—just to be heard, just to keep their place at the table. This is how systems of power and oppression work, and they continue to operate in social justice fights just as they work in everyday life.

They are harder to win because implicit bias is hard to acknowledge and harder to strip away.

And this is what’s happening at Yale right now. 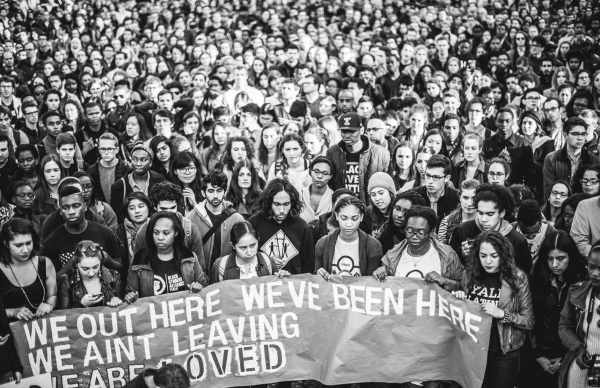 The associate master’s email and the SAE Halloween incident are just two straws in an ongoing fight that is finally being brought into the light. That camel has had a damn strong back for many years. None of the fears, pains, concerns, or demands expressed by students right now are new. But now is their moment to make them known.

Yes, the national news media is turning this into a free speech debate. Yes, people are calling for Yale students to “grow up” and not expect to be coddled. The real world is hard, they say. Safe spaces don’t exist. Be less sensitive.

They’re right: the real world is hard. It is doubly hard for anyone who is a member of a minority group, who has faced—and will always face—discrimination on any number of levels.

But campuses are always where the movement starts; they’re built for progress, especially the liberal arts ones. No one is saying that Yale is that much worse than anywhere else. No one is saying that students at the University of Missouri, for instance, have it better. But the Yale students are saying: let’s start this at Yale. Let’s use our access to the national stage to make a strong, clear, and unambiguous point. Let’s set an example that will bring the country up with us. Let’s start at home, because that’s where change starts, and Yale is our home.

I am not on campus anymore. I can’t speak to the mood of the place, to the lived experience of students there right now. But I can say that I am proud to see productive, positive protest taking place. I am interested to see the demands drafted. I want to see activism and administrative action at work.

More than anything, as I’ve had urgent, thoughtful, and conflicted conversations with fellow alumni and current students, I want us—especially those of us who, in this case, are in the majority and have the privilege of ignorance—to do our best to deconstruct that ignorance.

Change does not come from the top alone. Structure and agency are both at play here: we can only ask the college administration to do so much to break down preconceived biases and systems of conversation and social structure. (Mark Oppenheimer’s piece in Tablet is a worthwhile investigation into the limits of this approach). Yes, Yale should create appropriate channels for submitting complaints; for educating everyone about cultural sensitivity; for improving diversity in faculty and in hiring.

But also, yes, every student and alum who wants to do better SHOULD do better, SHOULD be an agent of change. This is an open ask to people of color and others who want to participate: tell us how. Lead us there. Share with us the things that make you uncomfortable, that we have said or done that are not right. Teach us how to be better allies, so we can do our part to spread this change. Tell us what to read and what to watch. We will all shape our own opinions from this conversation, and not everyone will be on board. The debate will be real, and it will be healthy.

We’ve been ignoring it for too long and we’ve got to get started. It’s hard work. For many, myself included, it is often uncomfortable.

The Vilification of Student Activists at Yale | The Atlantic

What We Want & Need: Black Student Demands for the Administration | DOWN at Yale