“According to an ancient Chinese legend, one day in the year 2640 B.C., Princess Si Ling-chi was sitting under a mulberry tree when a silkworm cocoon fell into her teacup. When she tried to remove it, she noticed that the cocoon had begun to unravel in the hot liquid. She handed the loose end to her maidservant and told her to walk. The servant went out of the princess’s chamber, and into the palace courtyard, and through the palace gates, and out of the Forbidden City, and into the countryside a half mile away before the cocoon ran out. (In the West, this legend would slowly mutate over three millennia, until it became the story of a physicist and an apple. Either way, the meanings are the same: great discoveries, whether of silk or of gravity, are always windfalls. They happen to people loafing under trees.)”

I should have gone on a social media hiatus this week.

Instead, I’m obsessively trawling my feeds, which are filled with snapshots and comments about the start of the academic year. For many of my friends (now college seniors), it’s the “Last First Day.” For me and my 2013 cohort, it’s the First Not-First Day.

Sure, some people took gap years, or semesters off, or had unusual academic schedules. Whatever. In the end we were bound to the biological clock of the classroom since age 5 (or younger), a solid 17 years of schooling in which summer came to a close at the end of August, marked by the annual trips to Staples for fresh mechanical pencils and the agonizing search for the perfect bookbag. (The phases were endless: classic Jansport backpack, nerdy rolling pack, utilitarian canvas messenger bag, glitzy leopard-print tote, hippie cross-body satchel, leather carryall…) And of course there was always the critical question: binders or notebooks? And in college: Mead Five-Stars or Moleskines? Followed by the equally grave transition from forgiving, erasable pencils to indelible—gasp!—pens. I’m not exaggerating when I say that I can trace my growing-up—my personal journey to adulthood (or some semblance of it)—through the materials I chose to carry with me to school, the things I decided were worthy receptacles for my accumulating knowledge. 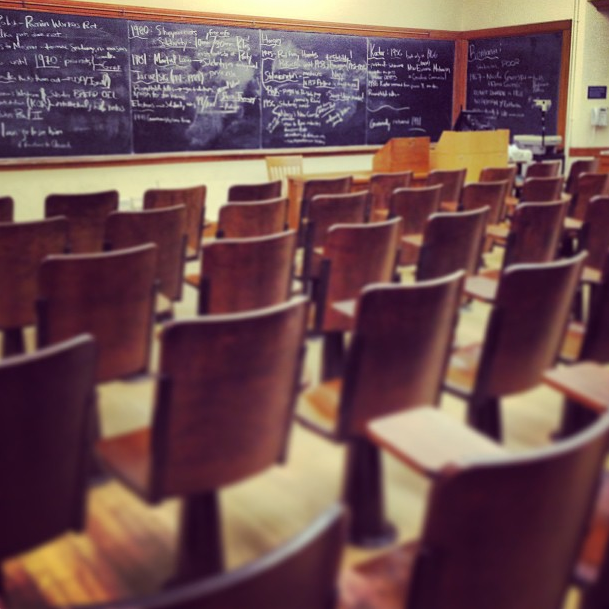 Which is all just to say that I didn’t do that this year. For the first time in memory: no back-to-school. Just another day out here in California (I know, life is rough). There’s something oddly final about missing out on that annual ritual. This must be what it’s like to be born on a Leap Year, when everyone just skips over your birthday. Or to miss New Year’s Eve while traveling across time zones.

Because back-to-school was always more than just a day to show off some fresh kicks, your summer tan, and a Lisa Frank sticker collection. Back-to-school was, each and every time, that most glorious of things: a new start. The night before, sleepless, I would resort to envisioning my new self for the year, seeing with eager optimism the bright possibilities. This year, I thought, I would be friends with her. I would hang out with him. I would talk like that. I would look like this.

The comforting regularity of the opportunity for reinvention was what gave school its everlasting charm as we got older and jaded by the persistence of homework, studying, the mundane reality of the academic grind. Finish off a semester or a summer and then, no matter what had happened, the First Day was a blank slate.

Wise people will tell you that every day is a blank slate. Today, they’ll say, is the first day of the rest of your life… etc. etc. Whatever. I’m 22; I am not wise. I’m coming off of four years fueled by the energy of words like FOMO YOLO young-wild-free live-while-we’re-young we-can’t-stop ’til-the-world-ends. Those are powerful mantras for recklessness and immaturity, and they’re a hard habit to kick. It’s not cool to be wise. It’s hard to be wise. It’s hard to remember that not going back to school doesn’t mean nothing has to change. It’s hard to feel the fizzy butterflies of a fresh start without everyone around me doing the same thing.

On the flip side, though, there’s a dark glamour in now feeling personally responsible for any changes I might want to make to my life. (I’m hardly the first person to say this, but bear with me.) If this is the empowerment of adulthood, it’s scary but encouraging. As I go back through those social media feeds and see the kids these days having their back-to-school moments at Camp Yale, bringing in the year with a bang and plenty of booze, I’m not jealous of what I’m missing. I don’t envy them their fun. Instead I envy how easy it is for them to engage in an institutionally-mandated reinvention of self.

They remind me that if I want to feel that First-Day fervor again, no one is going to serve it up to me. Like everyone else before me, I have to find it.

“The dog was hoping to induct the man into a taste for superfluous activity, to inculcate in him some part of his own energy; the man could have wished that the animal, by virtue of being loved, might appreciate if not abstract speculation, at least the pleasure of tasteful, gentlemanly idleness; neither of them, of course, achieved anything, but they were content nonetheless because happiness consists in seeking for an end in view rather than in attaining it; or so we are told.”

“I had drunk too much wine and afterward coffee and Strega and I explained, winefully, how we did not do the things we wanted to do; we never did such things.”

—Ernest Hemingway, A Farewell to Arms