“A thing is a thing not what is said of that thing.”

This is the hand-written quote that’s scrawled on a notecard stuck to Michael Keaton’s vanity mirror in his backstage dressing room in a shabby Times Square theater. (The movie, for reference, is Birdman.) It’s a cluttered room – a stuffed animal here, flowers there, an old radio, posters, knickknacks, rickety chairs – but even in this mess, even as we get a first glimpse of Keaton’s miraculously wrinkled forehead in his reflection, that quote was where my eyes flashed to, and rested for a long moment. And then the camera swings and Keaton distracts you with an unexpected pout, a shrug of the shoulders, and the screen is his again.

A thing is a thing – not what is said of that thing.

Boyhood is about faces and representation, too. Every review I’ve read (a thing is a thing, not what is said of the thing, but still), notes the moment we meet our hero, Mason: there he is, lying on his back in the grass, eyes wide and dreamy, as fresh and young as anything. He’s got an expressive face (we learn, as we age with him), but he holds himself close – he’s not expansive, never flips a switch. A child contained. A child intent on finding truth, not living above it. 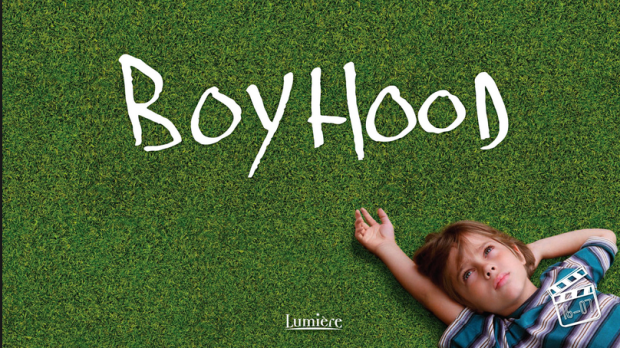 The thing about movies like these – movies about sweet white boys, weird white men, the kid down the block, the actor we grew up with – is that they don’t threaten us with difference or with discomfort. Yes, Mason messes up, and says things that shouldn’t be said; but the anxiety we feel is because we don’t want to see ordinary mistakes in our Hollywood movies. Yes, Keaton is a mercurial bastard, Iñarritu casting his brand of subtle magical realism to guide us deftly from the ordinary to the explosive; but the fear we feel scratches at us because we have to make leaps of rational faith, because we can’t trust this character.

But no, they don’t scare us in the sense that a deeply changing world can scare us. They are friendly in their familiarity: the narratives, tropes, and story arcs are what we’ve always seen, known. The difference is only in the art of the telling.

I loved Boyhood. I can forgive it pretty much any flaw because that’s the point: to show us, with aching slowness and tender, impartial honesty, the moments that aren’t picture-perfect. Lines we crave to hear (“I love you,” maybe, or “I’m sorry”) are never delivered. Beats are missed. Angst isn’t glossed over with a makeover montage. Drama is sporadic. Mason’s energy is slow, mesmerizingly out-of-touch. It’s a simple movie, simple desires, simple lives – which is where it derives its own sense of magic. The premise gives it room to breathe, excuses its mistakes, adds a childish charm. As viewers, we get to be naive; we get to be cheesy. Because for once, we can’t critique a movie for its attempt at wit or humor or depth. Cynicism isn’t allowed, and it’s a relief.

I really liked Birdman. Edward Norton is a lit match; Emma Stone’s eyes are too awesomely big for her face. Keaton is weird, obviously, which is the only way it works. It’s artifice at its finest, the division between fact (Keaton IS this character, after all) and fiction (but can he levitate, truly?) shunted aside. You’re left with little time to ease into the suspension of disbelief; you just have to accept this alternate-yet-so-close-to-home reality. It bubbles over with its own cleverness, the melding of backstage and onstage and the world stage, the continuity of the shot mimicking the relentless pace of 21st century digital life. (The social media tirade felt weak, though – an older generation trying to write words into Emma’s mouth as she hurls them, insults, at a man the writers must themselves identify with, as though they’re delivering their own self-punishment, an apology for their age.)

But a thing is a thing, not what is said of the thing. You can write yourself crazy thinking round and round about these stories and what they say about Hollywood, America, the patriarchy, film, art, creativity, consumerism, egomania. The thing, though, is still the movie. Two stories, a boy and a man. These are the subjects, objects, pronouns. They are real and we can’t ignore them.

The only question left: why these things? Why not other things? What can we say about the absence of things? Because no thing is… nothing.